BEIJING, REUTERS -- Deepening cross-border financial cooperation between Russia and China remains a priority, said a senior official with the Moscow Exchange (MOEX), with more products expected for companies and investors to raise funds and buy securities.

Russia and China have signed a series of agreements over the last two years, including memorandums of understanding between Bank of Russia and China's central bank on clearing and settlement of Chinese yuan payments in Russia, and cooperation on gold exchange trading.

But cross-border individual and portfolio investment has been slow to materialise, with Chinese investors now holding only about $3 billion in Russian equities and bonds, compared with $65 billion in annual trade between the two countries.

"The ultimate goal is to reach with China the same level of partnership we have had for many years with western financial markets," said Igor Marich, who oversees MOEX's money and derivatives markets.

New issuances now under discussion include exchange-trade funds along with the long-anticipated issuance of a yuan-denominated bond at MOEX, said Marich, who expected fixed income to be a main driver, with some Russian sovereign bonds offering yields of more than 8 percent.

"I see growing interest of Chinese investors into Russia," Marich told Reuters. "That's one reason for cautious optimism. The other real transactions have happened."

Marich pointed to CEFC China Energy's $9.1 billion purchase of a stake in Russia's Rosneft Oil and the participation of China's Fosun International Ltd in a consortium of investors that bought a 10 percent stake in Polyus, Russia's top gold producer.

Marich was in Beijing to promote the Moscow Exchange and Belt and Road investment opportunities on the final leg of a three-city tour that included Shenzhen and Shanghai.

In May, MOEX signed an expanded strategic cooperation agreement with the Shanghai Stock Exchange that included provisions to improve collaboration on market data and develop and launch yuan and rouble quoted products.

In December, MOEX also signed an agreement with CITIC Securities and Galaxy Securities to see the Chinese brokerages provide access for their clients to Russian securities traded in Moscow. 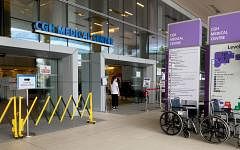