BUDAPEST, BLOOMBERG -- President Donald Trump’s new brand of foreign policy is about to see its next test in Hungary, a NATO ally that has swerved closer to Russia as populist Prime Minister Viktor Orban pushes the nation toward authoritarianism.

The U.S. intends to move from public criticism of the rollback of democracy and a policy that isolated Orban under former President Barack Obama. Instead it will engage the anti-immigrant, euroskeptic leader and seal strategic deals, said David Cornstein, Trump’s new ambassador to Budapest.

“Criticism alone is not a strategy,” Cornstein, a former jewelry executive in New York and a close friend of Trump, said in written responses to questions from Bloomberg News on Wednesday. “We must pursue engagement, not just with the Hungarian government, but also with the Hungarian public.”

The pivot is part of the sea change in U.S. foreign policy, as Trump has clashed with the U.S.’s closest allies in the European Union and NATO while reaching out to foes from North Korea to Russia. Trump’s administration has downplayed human rights concerns and reached out to authoritarian figures including Russian President Vladimir Putin and -- until a current conflict that has roiled currency markets -- Turkey’s President Recep Tayyip Erdogan.

The change in approach to Hungary also is a recognition that ostracizing Orban delivered scant results. Since returning to power in 2010, the 55-year-old former anti-communist student leader has consolidated power at home, spread what he calls his philosophy of “illiberalism” to other countries, challenged the EU’s democratic values and courted the influence of Russia and China.

Trump called Orban in June to congratulate him on a third consecutive parliamentary election victory, a gesture inconceivable under Obama’s administration, which drew up a list of allegedly corrupt Hungarian government officials and barred them from entry into the U.S. Trump praised Orban for building a fence on his country’s southern border, an echo of the American president’s trademark pledge and a symbol of the anti-immigrant politics they share with other populist leaders across the EU.

The U.S. priority is to strengthen Hungary’s commitment to the North Atlantic Treaty Organization and to make it a bulwark against Russian and Chinese influence, Cornstein said. The U.S. wants to strike deals with Orban, including a pact to strengthen military ties and one on supplying Hungary with a source of alternative energy -- Trump has been pushing U.S.-produced liquefied natural gas for Europe -- to reduce dependence on Russia, he said.

An alienated Orban has cozied up to Putin since taking power, sealing a $12 billion nuclear power-plant deal and criticizing economic sanctions against Moscow for its 2014 annexation of Crimea and support of a separatist conflict in Ukraine’s east.

Hungary has tried to block Ukraine’s talks with NATO, accusing the government in Kiev of curtailing language rights for the country’s ethnic-Hungarian minority. Ukraine counters that Hungary is doing Russia’s bidding by trying to divide the military alliance. Hungary is also building a railway connecting Belgrade and Budapest with Chinese funding, part of China’s Belt and Road initiative.

“The United States is working hard to shore up the West in a time of serious geopolitical competition,” Cornstein said, highlighting Ukraine’s talks with NATO as an important issue. The U.S. “offers far more than what’s on the table from Russia or China,” he said.

There already have been signs the U.S. may tolerate the Hungarian leader’s increasing authoritarian tilt, which has included the capture of independent institutions and a clampdown on dissenting voices, including the press, universities and civil society. In July, the State Department said it wouldn’t disburse $700,000 in grants announced last year for cash-starved independent Hungarian media. The embassy said has said it hasn’t canceled the program but is looking to make it regional.

Trump’s policy shifts have drawn fire from traditional U.S. allies. After last month’s acrimonious NATO summit in Brussels, EU President Donald Tusk, a former Polish prime minister, said Trump is seeking to “reconstruct the global order in a way where America has no stable friends but has flexible alliances,” which could hurt Eastern European nations that rely on American military muscle to ward off threats from Russia.

On Hungary, skeptics say engaging Orban might legitimize his pursuit of an “illiberal state” lacking effective checks and balances on his power without getting much of anything in return.

Cornstein said the U.S. under Trump remains committed to democratic principles and will continue to voice its concerns as part of a strategic partnership with a NATO ally. The ambassador called on Orban to back off from plans to shut down Budapest-based Central European University, established by the billionaire philanthropist George Soros to train democratic leaders across eastern Europe.

“Our values have not changed -- we still very much care about principles like the rule of law, freedom of the press, and freedom of speech,” Cornstein said. “But we need to be smarter about how we talk to our allies when we have disagreements, and we should approach them with respect and friendship.” 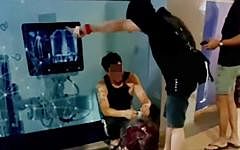